On behalf of the PostgreSQL community and the team at MigOps, we wish all the readers a very Happy New Year - 2022. It is no wonder that PostgreSQL is the only Open Source database with a consistent increase in its adoption every year. The Year 2021 has been another milestone in the PostgreSQL world. Every user of PostgreSQL has either directly or indirectly created a positive impact to the PostgreSQL adoption through - patch submissions or reviews, feature requests, blogs and articles, speaking at PostgreSQL conferences, discussions in postgres mailing lists about proposed features, etc. In this article we are going to see a summary of the year 2021 in the PostgreSQL ecosystem. 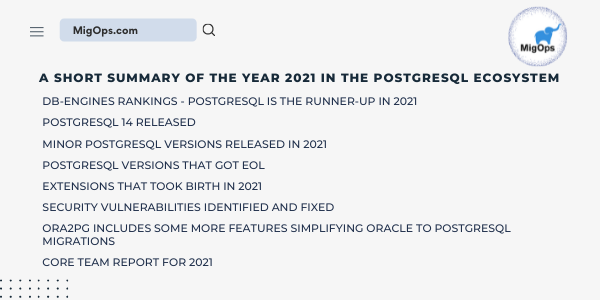 What’s being discussed in this Article ?

However, there was a drastic increase in the popularity score of Snowflake, in the month of December, 2021. This made snowflake, the DBMS of the Year 2021 PostgreSQL wins as a runner up with a difference of 7 points.

As per DB-Engines Rankings, PostgreSQL has already been the DBMS of the Year in 2017, 2018 and 2020. It now becomes the only database to win this title 3 times in the past 5 years.

PostgreSQL 14 released - Some of its features

The PostgreSQL community has announced the release of PostgreSQL 14 in the year 2021. This release included several improvements in performance of heavy and distributed workloads, administration, observability and security.

Some of the PostgreSQL 14 features

PostgreSQL versions that got EOL after 2021

PostgreSQL 9.6 had its final minor version 9.6.24, released on 11th Nov, 2021. After this release, the PostgreSQL community is not going to release any security patches or bug fixes for this major release, 9.6. This does create an urgency for customers using PostgreSQL 9.6 who have not planned an upgrade sooner. MigOps has already blogged about an approach to upgrade the PostgreSQL 9.6 to PostgreSQL 13 using pg_upgrade with hard links. The blogged approach does work for a direct upgrade from 9.6 or higher to PostgreSQL 14.

Please see the PostgreSQL versioning policy to understand the dates after which a major version is considered as unsupported.

Extensions that took birth in 2021

One of the beautiful features of PostgreSQL is the ability to have extensions serving various purposes. Developers across the world contribute to several new extensions and we are going to list out some of the extensions that took birth in 2021.

There were 35 security vulnerabilities in total that were detected in 2021 for core server, client library, contrib module, client contrib module and binary packaging. The same have been fixed through patches pushed through minor versions as seen in this security documentation maintained by the PostgreSQL community.

In a nutshell, the number of security vulnerabilities that got detected and fixed are as follows for each PostgreSQL major version. Please ensure to validate whether you are using the latest stable version as of current date as seen in PostgreSQL release notes.

Contact MigOps today, if you are not aware whether your PostgreSQL database is affected with any security vulnerability. MigOps also offers Health Audit to identify the performance bottlenecks, the need for rightsizing of your databases and provide short-term, mid-term and long-term recommendations for the increasing workloads.

Ora2Pg has been the only Open Source tool supporting Oracle to PostgreSQL migrations, active for 21 years. It now includes features optimizing the migration speed with the integration of Oracle_FDW as seen in one of these articles. In addition to that, Ora2Pg now supports validation of row counts and migrated data upon migration from Oracle to PostgreSQL. There are many features that got added through 3 releases this year. Please refer to the release notes of v23.0 and v22.0 and v21.0 for more details.

By the way, Ora2Pg is proudly sponsored by MigOps. We are dedicated to adding more features to Ora2Pg and simplify the database migration process from Oracle to PostgreSQL.

Subscribe to our newsletters to receive latest updates about PostgreSQL and the solutions supporting migrations to PostgreSQL.

In this blog post, you can see  that the popularity of the PostgreSQL database has been increasing year over year. At MigOps, we have experienced  increased requests for Migration Assessments and Database Migration support in 2021. Leadership teams in larger organizations are considering cost savings using (1) Migration to PostgreSQL and paying zero license fees and (2) Migrations to cloud to reduce infrastructure maintenance costs. MigOps is glad to have a team to support you with migrations to PostgreSQL and cloud. Contact Us today to see how we can simplify your database migrations or simply fill the following form.