While migrating to PostgreSQL, some of the users may be curious about the type of replication offered by PostgreSQL. Some might want to know if they have to pay any additional enterprise license in order to achieve this requirement. This is because, a few commercial databases require a customer to take an enteprise license to setup replication. But, PostgreSQL, like advanced Open Source databases, automatically offers several types of replication methods built-in. This means, we never have to consider taking any additional license or an enterprise solution and stay away from vendor lock-in while using PostgreSQL. In this Article, we shall discuss the streaming replication internals and also see the detailed steps involved in setting up Streaming Replication in PostgreSQL 13.

Streaming replication may also be referred to as physical replication. One would generally hear the terms master and standby in postgres. A master is a server that accepts writes and streams changes to a standby. It can be compared with a primary database in some of the database technologies. Whereas, a standby replicates changes from a master and accepts only reads. It may be called a replica in some of the database technologies.

To understand the internals of how streaming replication works, we need to start from ACID properties. The letter D in ACID means durability. Durability is said to be achieved when a relational database ensures that a committed transaction is never lost, even upon a crash. In general, anything in memory (or RAM) can be lost upon a crash but not anything on the disk.

Considering this fact, there exists a background utility process in PostgreSQL called WAL Writer that continuously writes the WAL records from memory to WAL (Write-Ahead logs) segments on the disk. The backend may also flush the WAL buffers to WAL segments. What this means is that a transaction is said to be successful only when it is written to a WAL segment on the disk. Of course, this default behavior can always be altered.

In the following Streaming Replication Architecture diagram, we see an example of how some blocks/buffers have become dirty blocks because of an UPDATE statement. Dirty buffers or dirty blocks are the modified buffers due to the changes to the tuples (or records) in that block. 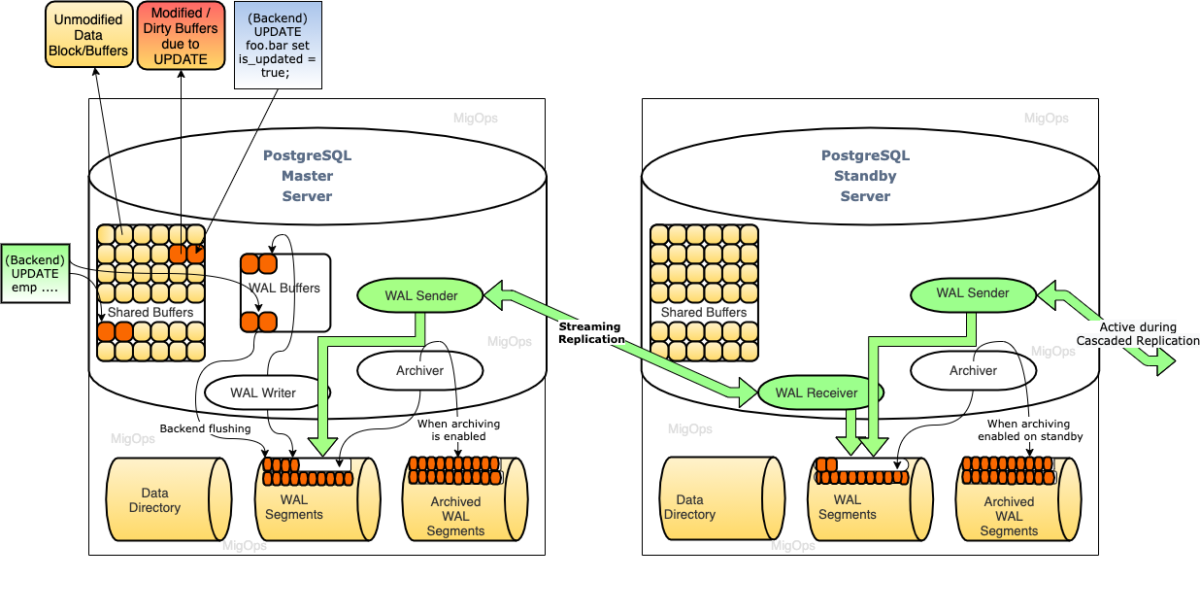 As seen in the Streaming Replication Architecture diagram above, A WAL segment contains WAL records that include the changes done to data blocks (in the form of DML or DDL).

When we setup streaming replication, a new background process called WAL sender is started on the master. This process accepts requests from a standby and streams the WAL records continuously to its standby. Similarly, a background process called WAL receiver is started on the standby, that receives and applies these changes. More internals on Streaming Replication protocol can be seen here.

Let us now see the detailed steps involved in setting up streaming replication.

Step 2 : Allow the standby’s replication user to connect to the Primary. See this documentation on pg_hba.conf more details.
(Step to be executed on the master)

Replace 192.169.12.1 with the IP address of the standby that should be allowed to make replication connections to the master.

Step 3 : Perform a reload to get the changes into effect.
(Step to be executed on the master)

Step 4 : Following are the list of configuration parameters that enable us to perform a robust replication setup for production databases.
(Step to be executed on the master)

Please Note : Some of these parameters are not mandatory for streaming replication but only for a good setup.

(archive_command is not a mandatory parameter but suggested for production databases).
This parameter has no effect on standby unless archive_mode is set to ‘always’.

Step 5 : Reload or restart as necessary, upon the parameter changes.
(Step executed on master)

Restart if necessary. PGDATA is the environment variable for the Data Directory.

Step 7 : Validate if the following parameters are set. Else, set them appropriately on the standby.
(Validation to be performed on the standby)

primary_conninfo : When the backup is taken with -R flag as seen in step 6, primary_conninfo parameter is automatically added to the postgresql.auto.conf file in the data directory (seen in following log). A parameter set in this file is considered by postgres over postgresql.conf or other configuration files as part of include_dir.

This parameter helps standby with the connection details of its master. Standby uses the user, host, port and other details added to this configuration parameter to start streaming WAL records from its master over the streaming replication protocol.

We can see more details on the above parameters in this documentation on configuration parameters for postgres streaming replication.

Step 8 : Create a signal file to mention that the server is a standby server. The standby.signal file must be created inside the data directory of the standby.
(Step to be executed on the standby)

Step 9 : Start the standby to enable replication.
(Step to be executed on the standby)

Step 10 : Validate replication between master and standby using the following command on the master.
(Validation to be performed on the master)

So far, we have seen the steps involved in setting up Streaming Replication in PostgreSQL 13. In our future blogs, we shall see how to set up Synchronous replication and also see how we can perform a failover and a rewind of the demoted master to add it back to replication from the new master. Subscribe to our blog posts to stay up-do-date. Contact us to know more about how we can help you tune and set up a robust PostgreSQL production environment to help you migrate to PostgreSQL.