By the way, if you are coming to AWS re-Invent, you can always have a direct chat with me about Migrations to PostgreSQL or any existing problems with your PostgreSQL deployments on AWS. You may see me sometimes around the Percona booth : 1429, The Venetian - Las Vegas at the re-Invent. If you couldn't find me, please send an email to : talktoavi@migops.com for a conversation anytime.

General observations by some of our Customers using Aurora PostgreSQL

For this reason, I always had the thought in mind to publish a benchmark of PostgreSQL on RDS and Aurora PostgreSQL and provide some insights. RDS PostgreSQL is generally considered as PostgreSQL though there are some limitations compared to vanilla PostgreSQL. We will discuss this difference in my next article.

A high level view of the benchmark results

In a gist, I would assume that the overall magic of Aurora PostgreSQL is observed due to its huge IOPS allocation compared to RDS. Again, this does not mean that the IOPS performed on RDS PostgreSQL and Aurora PostgreSQL are the same. There is always a huge deviation and you do pay for it. You will understand this in detail by the end of this article. When RDS was tuned with slightly better IOPS limits, it outperformed Aurora Postgres each time. This benchmark also shows the mystery of Aurora's high CPU utilization that gives an understanding of why some of our Customers had to upgrade their Aurora Instances during performance issues due to 100% CPU usage.

Following are the results of the benchmark performed against RDS with tuned IOPS and Aurora PostgreSQL databases. 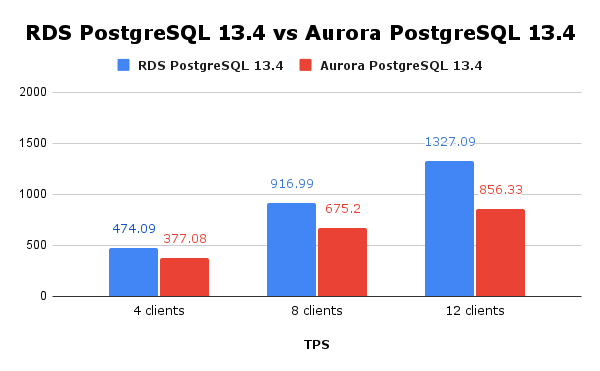 Before looking into how the benchmark was performed and seeing some interesting graphs, let me talk about some of my observations from the benchmark. Every detail mentioned in this long article is worth reading even if it takes some time.

Observations from the Benchmark

One of the most common reasons I have heard as the reason for choosing Aurora Postgres is that the replication latency is considered to be too low for near to real time reads on standby or reader instances. However, based on the CPU utilization graphs from AWS monitoring dashboards, it is very clear that RDS had a CPU utilization of less than 40% with tuned IOPS limits and lesser price, but for the same workload, Aurora Postgres had a CPU utilization of over 60% with lesser performance than RDS. For this reason, I would rather use the remaining server resources on the RDS Instance to satisfy my read workload, rather than spinning up a Synchronous standby for a near to real time read, at a cost of performance.

While RDS had a very tiny IO Queue depth between 5 to 10 sometimes, Aurora had an IO Queue depth mostly between 15 to 25 (surprising !). The Total IOPS reported on Aurora was several times higher than the Total IOPS on RDS, thus helping me understand why one of these Aurora Blogs mentioned  that 65% of the bill of Aurora is its IOPS. Unfortunately, such articles talk about tuning the Postgres database while the mystery of why Aurora Total IOPS vs RDS Total IOPS had a huge variation, is not considered. So, Customers end up spending time tuning wrong places and assume it is the untuned database or the application that is responsible for huge bills, maybe. Eventually, one may end up upgrading their Aurora PostgreSQL Instances for more CPUs and pay more than they actually should.

AWS Instances chosen for this benchmark

Following are the Server specifications chosen for this benchmark.

What was used to perform the benchmark ?

pgbench has been used to perform the data load and to run TPC-B benchmarks. pgbench has been explicitly designed and developed by the PostgreSQL community for running benchmarks against PostgreSQL databases. While doing the benchmark, it is always important to perform repeated executions and see the TPS and thus I have 4 iterations each with 4, 8 and 12 clients. By the way, I have kept all the PostgreSQL parameters/flags as default and performed the test with AWS assigned default parameter groups.

As the EC2 Instance, RDS and Aurora PostgreSQL Instances are in the same network, we can run pgbench from the EC2 instance remotely for both initialization and the benchmark.

In order to run the benchmark using pgbench, we must start with initialization. In this stage, it creates 4 tables followed by loading some data, depending on the scale factor specified. Scale factor used for the data load was 10000.

Benchmarking using pgbench ran with different levels of concurrency against both RDS and Aurora Postgres instances for an hour.

The command used to perform the TPS benchmark with 4 clients is as follows. The number 4 will be replaced by 8 and 12 when benchmarking with 8 and 12 clients.

When I initially performed the benchmarking on RDS with 300 GB storage (GP2 SSD) that gets us 900 IOPS (3 IOPS per each GB), the TPS (Transactions Per Second) was not that great because of the IOPS limitations for the workload on RDS.

Here are the benchmarking results for both RDS PostgreSQL 13.4 with untuned IOPS and Aurora PostgreSQL 13.4, with 8 clients for a period of 1 hour for all 4 iterations. 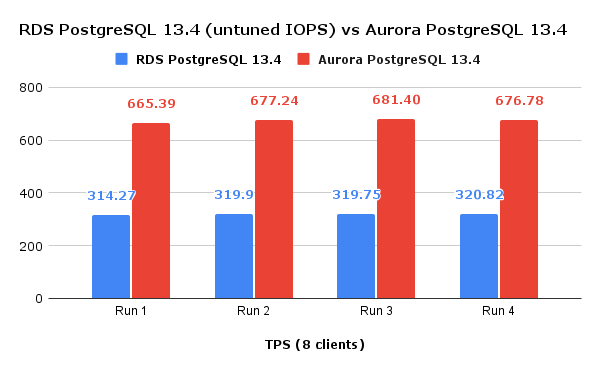 No doubt that Aurora PostgreSQL outperformed in this test. However, this is where everybody stops and do not understand why RDS did not perform well. Instead, they go ahead and migrate to Aurora PostgreSQL as the results create an assumption that Aurora is always many times faster than RDS.

What to do when your RDS PostgreSQL performance is not as good as expected ?

What I have done to understand the performance degradation better was by having a closer look at the Wait Events on RDS. I have seen where Postgres' performance on RDS went bad. The 3 major wait events observed on RDS Performance Insights are all directly related to IO as seen below.

Following image is just a snippet of the top wait events from AWS Performance Insights.

Optimizing the IOPS on RDS

I have noticed that my benchmark for around 8 hours on Aurora created 849 Million IO requests as per AWS Billing, that is equivalent to $ 169.88. This is when I decided to rather utilize some of these dollars to upgrade my storage on RDS for a better IOPS. So, I have upgraded my RDS storage to 1000 GB, which costs $ 100 dollars ($ 0.10 per GB-month x 1000), it gets me 3000 IOPS approximately. This is when the performance of RDS was observed to be much better than Aurora along with low resource utilization (CPU, IOPS, IO Queue depth, etc).

Following TPS was observed on RDS and Aurora after the TPS benchmarking was completed. 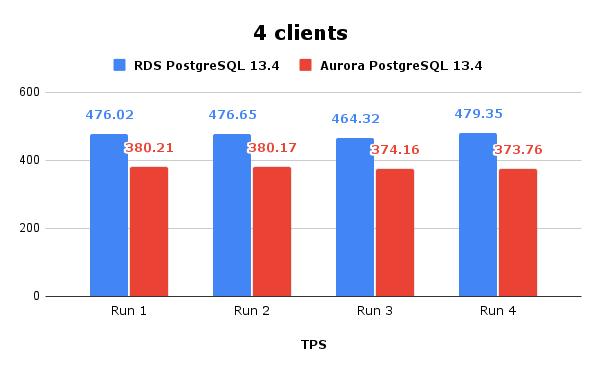 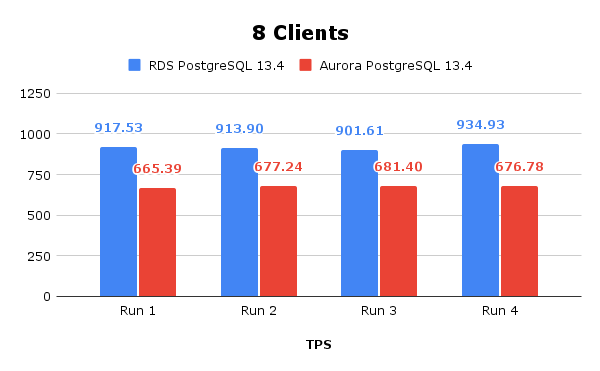 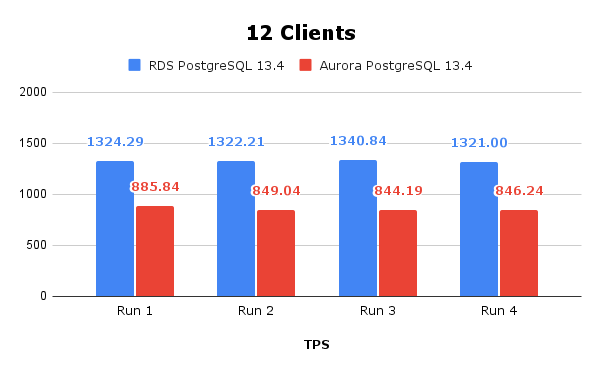 Following is the RDS TPS Rate that has been consistently around the same value throughout the 4 iterations of the benchmark with 8 clients.

CPU Utilization on RDS vs Aurora

RDS CPU Graph for all the 4 iterations of the benchmark with 8 clients.

Aurora CPU Graph for all the 4 iterations of the benchmark with 8 clients.

IOPS Utilization on RDS vs Aurora

Another mystery observed during this benchmark is the IO Queue depth. Some of the blogs on Aurora do claim that Aurora PostgreSQL is great for massive concurrent workloads and faster than PostgreSQL. Some of the customers may also assume that Aurora has almost unlimited IOPS unlike RDS. In that case, there should not be an IO Queue depth that is worse than RDS. See the following graphs showing the IO queue depth on RDS vs Aurora.

When you do not get enough performance on RDS, please see where the performance is going bad. A good place to start is by looking at the WAIT Events. Most of the problems on RDS are related to IOPS. Tune your IOPS and compare the performance between RDS and Aurora before switching to Aurora. As noticed above, your bill for Aurora IOPS may be huge along with the need of upgrading Aurora Instances because of its weird CPU utilization when compared with RDS.

I am volunteering to spend a few hours each month talking to Customers who deployed PostgreSQL on AWS or other cloud platforms and providing necessary advice. Especially, if you are facing any performance issues or huge bills and willing to get some advice, please send an email to : talktoavi@migops.com and our team should be able to schedule a call with me. For professional services around Migrations to PostgreSQL and tuning and maintaining PostgreSQL databases on cloud and On-Premise, please contact us at sales@migops.com or submit the following form.